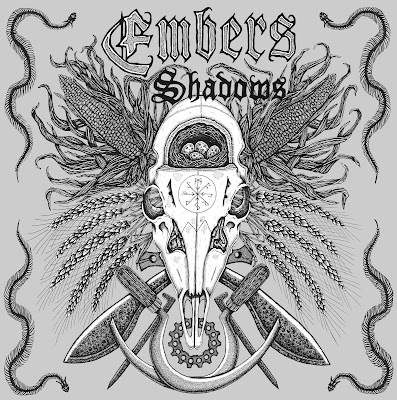 Finally you can order "Shadows" in it's double LP format directly from Embers.

"Probably one of the best releases of 2011 for me (even if 2011 hasn't ended yet). Great atmosphere, and an amazing mix of doom metal, blackened crust and even progressive rock - highly recommended!"

http://www.cvltnation.com/embers-shadows-review/
"The musical performances on Shadows are stellar. The drums can be extremely fast and brutal as well as lock into some serious groove.."

http://www.sputnikmusic.com/review/44236/Embers-Shadows/
"I would just like to know one thing...where in the hell did Embers come from?"

http://mishkanyc.com/bloglin/2011/05/11/review-embers-shadows/
"Fans have waited years for a full-length and little did they know they’d be receiving a magnum opus."

Posted by Embers at 3:55 PM No comments:

This song is off the new Embers album "Shadows". The videos are all creative commons video projects from Flickr. You can access more music and merchandise at ﻿﻿http://embers.bandcamp.com Embers will be on tour in Europe from May 25th through June 10th. To read more about updated tour dates and places you can go to http://iconoclastrecords.org/. In an effort to raise money to buy our plane tickets, we are encouraging Embers's fans to download our new album, "Shadows" for a donation and/or to purchase beautifully crafted Embers illustrations on T-shirtst, Long Sleeves and Patches here: http://embers.bandcamp.com/

We hope to see you on the road!
Thanks and Cheers~
Embers
embersmusic@gmail.com

Links to the rest of our sites are listed below:

Embers' Master Recording is Lost in the Italian Post!!!

Embers versus the Italian post!!! Where is the Embers master recording?!?! It never arrived with Iconoclast. We're still waiting. No news yet, but we need it to show up before our tour.

Embers is raising money to get our asses to Europe for an upcoming tour in May. Buy our AWESOME merchandise!!! T-shirts, long-sleeves, C.D.'s, records or whatever you want. We'll just make it. All our merch has dark iconic imagery.

I met Mila in 1999 at La Scintilla, a squat in Modena, Italy. I was on tour with my previous band Lesser of Two. Mila runs a number of labels including Agipunk, Break the Chains, and Iconoclast. Recently Iconoclast agreed to release Embers’ upcoming album, Shadows.

During Lesser of Two’s tour in ’99 as well as subsequent tours by Embers, we played at many squats such as La Scintilla.

Before touring Europe for the first time, I always thought of squats as merely abandoned properties which people just occupied for shelter. As a teenager, some friends of mine and I had occupied a vacant warehouse. We brought furniture into an empty office in the warehouse and hung out there. I remember when Ash, the other guitarist on Lesser of Two’s first E.P., was kicked out of his parents’ house and began living in the warehouse.

Once his parents kicked him out he was living in the warehouse without electricity, and one of the only places we could plug in was a local park that was known as a pick-up spot for guys cruising for sex. Eventually Ash left town and Lesser of Two became a three piece with my wife, Kelly, who currently plays bass with me in Embers.

Create your free online surveys with SurveyMonkey, the world's leading questionnaire tool.
Posted by Embers at 1:26 PM No comments:

Check out these links.